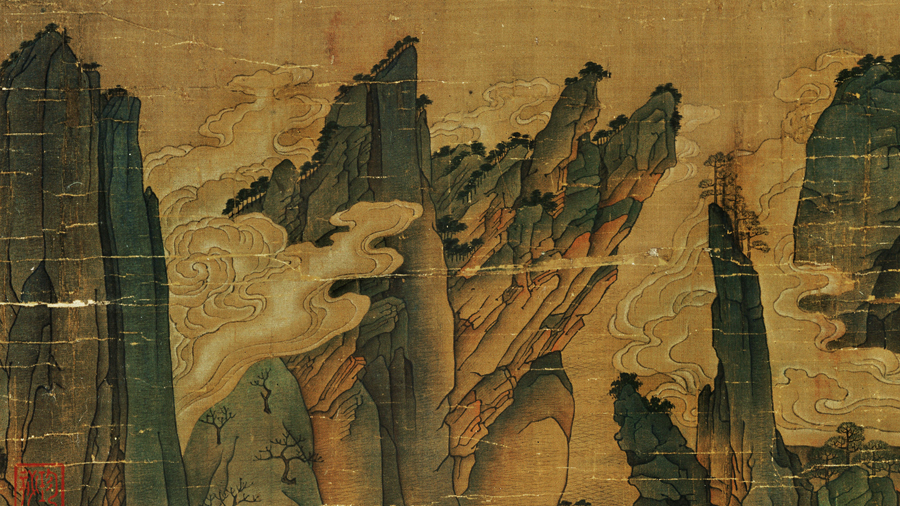 Zhuangzi’s Carefree journey 《逍遥游》, which is full of romantic color, not only embodies the idea that immortals and spirits exist, but also establishes the concept of “travel” and “wandering” 游 , as the core of its space consciousness. Besides the quality of “eternal life”, “长生不死”, these supernatural beings also have the magical ability of “free ascending”, “自由飞升”, and this magical ability is precisely the romantic interpretation of Chinese literature and art of the space. “Eternal life” breaks the time limit of human life, so that the individual life can be eternally synchronized with time. The concept of “free ascending” liberates from the living space constrictions that constrains humanity, and places the weak individual life in the vast universe of space and time, transforming weakness into an indefinite magical lightness. The “Journey outside this world”, “方外之游” is a concept in Zhuangzi thinking that emphasizes the absolute freedom of individual life, that is a great manifestation of the subjective aspect of the human existence, it is the way the heart and mind travels to all things on earth, free from the constraints of time and space, in order to place ourselves in an ideal environment, and locating the spiritual home (the place where the soul is comforted and where the spirit rests) in an over time and space dimension. The great Zhuangzi transformed and reorganized the real time and space process, and replaced the real living time and space with the fantastic, changeable and free artistic space. In this artistic time and space, life has no end, in a total union with the world; the space of activity is also outside the mental imagery, and the best state of all things and the most fantastic realms are presented in the same time and space, which is beyond the material world supremacy and characterized by mysterious and mystical illusory. But Zhuangzi did not write about the distance between the supernatural beings and the reality of mortals, but there is a dialogue and communication between the two, in fact the immortals have a certain degree of humanity. Humans and immortals maintain the best state of being in a lukewarm relationship, in this way the Zhuangzi’s Carefree journey thought was more easily accepted in the artistic creations of later generations.

The blue-green mountain and water painting is the ideal pattern to seek the celestial being, and it’s the ideal schema to achieve physical transcendence. Also, from the pattern of the blue-green mountain and water painting, it’s not difficult to see that the immortals are not far away. The supernatural beings can go to the heavenly realm or come down to the mortal world; similarly, mortals through self-cultivation and the practice of asceticism can also become immortals. Therefore, the mountain jungles where the supernatural beings reside could be the same wooded mountain where hermits dwell, and along all the ages those who hid in the mountain forests often said that they encountered these immortals.

The maturation process of blue-green mountain and water painting is not only related to the ideas of supernatural beings, but is also related to the ancient practice of the “palace painting” of the imperial courts and aristocracy, that built all kind of palaces, halls, temples and pavilions. Daoist temples appeared in the mountain and water painting and gave to the viewer a visual sense of “temple spirituality”. In order to pursue the realm of immortality, the emperors and rulers in the sphere of their jurisdiction spared no effort to build palaces on a large scale, build temples and cities, in order to satisfy their “roaming to the land of immortals”, “游仙” and “escaping from the world”, “逃世” ideals and the inspiration to find the way to immortality. As it can be seen, the dwelling places of mortals and immortals aren’t separated from each other.

Li Sixun (李思训, 651-716) and Li Zhaodao (李昭道, 675-758) (Li Zhaodao – Emperor Minghuang’s Journey to Shu 《明皇幸蜀圖》,National Palace Museum, Taipe), aristocrats father and son of the Tang Dynasty, took the rigorous blue-green painting style of Zhan Ziqian (展子虔, 545-618) and his ability to paint everything in an excellent way (触物留情,备皆绝妙) and developed it at the highest level, and created the school of gold-green 金碧and blue-green mountain and water painting (his Stroll About in Spring  is believed to be the oldest Chinese landscape painting that has survived). With a majestic conception and the association of the illusory space where the celestial beings are, and with the “gold inlay”, “镂金”, they became the fixed pattern of “mists and clouds realm of immortals “, “烟霞仙圣之境”, and at this point the “supernatural beings style” “神仙格调” of “blue-green” and “gold-green” mountain and water painting was standardized. The majestic wonderland and the magnificent real world often appear in the painting combining the living environment of the human world with the imagination of the immortal world, creating a harmonious unity.

Once upon a time science destroyed the desire to find supernatural beings, the empirical laboratory replaced the imagination of the heavenly steed soaring across the skies with the truth of the knowledge, it replaced the fantasy of literature. With the invention of the submarine, we were told that the Dragon Palace doesn’t exist. The airplane broke the myth of a Heavens Palace, the search and speculation of the realm of the unknown seemed no longer a beautiful expectation.

The blue-green mountain and water paintings are also required by a kind of visual reproduction of the material objects, the mountains no longer have celestial beings, and the heart does not seek to hold in awe and veneration anymore. The teaching of sketching of the landscape enhances the ability to depict the scenario, but also limits the extension of imagination power, or it could be said that this belongs to another form of copying. However, its effectiveness has been recognized by the world. But art can be pluralistic, and the parallelism of the two methods is not necessarily a bad strategy.

Perhaps this is my groundless fear, but I really want to relive a kind of unconstrained way of handling things.